Update: Read about my April 2013 visit to Tenuta Di Valgiano at this link.

Tenuta di Valgiano first came to my attention when a friend of mine who spends a lot of time in Lucca gave me a fantastic present of a magnum of the Tenuta di Valgiano Rosso 2007. ‘A bottle from the little winery up the road’ was his description. I’d never tasted the wines before so when I saw them at RAW, I was over to the table in a flash. Certified as organic and biodynamic and with grapes harvested by hand, the red wines I tasted were unfined and unfiltered and the whites were filtered and fined with bentonite. All of the wines had sulphur dioxide added, although its use at Tenuta di Valgiano is kept to minimum levels.

Palistorti di Valgiano Bianco (50% Vermentino, 25% Trebbiano and Malvasia, 25% Chardonnay and Sauvignon Blanc – Vintages Tasted 2007 and 2010) – 2007 was a warm vintage and the wine really carried its piercing acidity and flinty minerality through the finish. I liked it and preferred it to the 2010. Not bad value at £10-15. 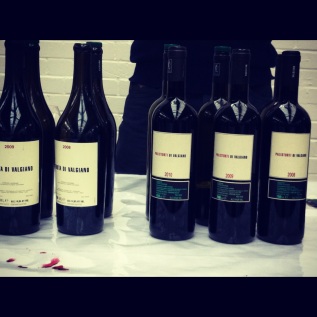 Palistorti di Valgiano Rosso (70% Sangiovese, 20-30% Syrah and Merlot, Remaining % of indigenous varieties) – Vintages tasted 2008, 2009 and 2010) – I found the 2008 to be a bit more rustic and frayed around the edges when compared with the 2009 and 2010. The perfumed, concentrated, sweet red berry fruits, plums and spices of the more recent vintages made them more immediately appealing, but put a bistecca alla fiorentina in front of me and I’d also be a happy man with a glass of the 2008. The 2009 and 2010 were both nicely balanced but the grippier tannins and brighter acidity of the 2009 meant that this one was definitely more up my street. Both were full/medium bodied and had above average length.

Tenuta di Valgiano Rosso (60%-70% Sangiovese, remaining % Syrah and Merlot – Vintages tasted 2008, 2009 and 2010 (barrel sample)) – Full bodied with far more elegance on the nose than the Palistorti di Valgiano Rosso. The sample of 2010 was quite closed but the earlier vintages were really good. The oak was certainly present, but wasn’t at all overpowering, and the aromas of blueberry, cherry, plums and forest fruits were balanced by the earthy flavours on the palate. I found 2009 to be a little more opulent than the smokier 2008 – the considerable tannins were also a bit smoother in the 2009 when compared with the 2008 at this early juncture in their lives. On the palate both wines had excellent herbal freshness and nice concentration while showing an underlying pepperiness (the 2008 in particular) that lingered through the long finish – Break open the piggy bank because I’d say both will be a real joy to taste in five/ten years time.

These were great examples of what I enjoyed at RAW because Tenuta di Valgiano has clearly chosen wine making methods that work for each of their wines. Although striving to reduce the level of intervention in the winemaking process, they don’t appear to be blind slaves to the ideology and aren’t afraid to throw the wine into oak if it’s appropriate. Indeed, all three of the wines above spend some time in barriques although delicate wood is chosen so as to minimise its influence on the characteristics of the finished wine. The Palistorti di Valgiano range offers early term drinking in the style of the flagship wine and I’d be happy to drink a bottle or two of it, the 2009 in particular, while I wait for my magnum of Tenuta di Valgiano Rosso 2007 to develop. One thing is for certain, this ain’t your average little winery up the road!

Visit www.RAWfair.com for detailed description of constituent grape varieties for each vintage and vinification methods. The wines of Tenuta di Valgiano are available in Ireland from Berry Bros. and Rudd (online only).