Well it’s taken me a while to make good on my promise to highlight some of the better wines that I came across when on the hunt for wines for my wedding but hopefully it’s a case of better late than never. While I didn’t come across much, if indeed any, crap wine on my tastings, I did find a worrying amount of really uninteresting wines. I partially put this down to the fact that in most cases I chose the wines myself with little research rather than being guided by a merchant who knew I was scouting wedding wines. I still strongly advocate finding yourself a good merchant to deal with but if you plan to go on a tasting spree, I don’t think it’s fair to string several merchants along using your wedding as a carrot for free samples. Although I think these will be good wedding wines, all three would also make great wines for drinking at home. Quick note on price – these three come in at around €10-15 but I presume prices might drop with bulk buy discounts etc.

Château Bauduc Rosé 2011 – I bought a mixed case of new releases from Château Bauduc, ostensibly with a view to comparing the 2011 Bordeaux Blanc to the 2009 that I’d tasted, and really enjoyed, previously. In order to make up a full case, I threw a few bottles of the Rosé into the order and boy, was I glad I did. Its alluring nose led to a bone dry palate that was amazingly fresh, clean and underpinned with crisp red berry fruit. It was a real quaffer and would go down a storm on any day where the sun decides to peek out from behind the clouds. I bought my bottles from Curious Wines in Cork but if you happened to find yourself in France and are dead set on ignoring my first tip from my last post, then you can buy direct from Château Bauduc and pick up in Calais.

Prà Soave Classico 2010 – Lots of stone fruits and flowers on the nose with tropical flavours emerging on the palate; fresh acidity and more than a hint of minerality with above average to good length. It had sufficient weight for an aperitif, and maybe for some lighter fish dishes but I’m not sure if it’d be a great pairing with something heavier. Still, my bottles didn’t last long at home and I seriously considered stocking up on this. Bought from From Vineyards Direct Ireland. 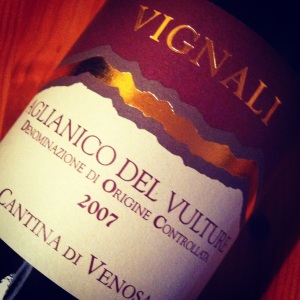 Cantina di Venosa Vignali Aglianico del Vulture 2007 – I first came across this wine when reading a Decanter Magazine tasting report but unfortunately that was about the only influence Decanter had on my tasting because, inexplicably, I flat-out ignored Michael Broadbent’s cardinal rule of taking a note every time you taste a wine. No matter, because this wine stood out from a lot of the boring reds that I tasted. One of the big plusses of this in terms of a potential wedding wine was that it wasn’t your typical old school, burly and tarry Aglianico but instead was a wine that I think would appeal to most palates. The wine is supplied to a few independents in Ireland by RetroVino and I picked up mine in The Corkscrew.

One thought on “Wedding Wines – Some Gems”