Winegeekery In Panzano With The Aid Of Alessandro Masnaghetti

Winegeekery – noun; obsessive interest in or enthusiasm for wine.

Ever one to indulge in a bit of winegeekery, after a morning espresso in the cafe on the main square in Panzano, I trudged over to the the office-cum-retail space run by Unione Viticoltori di Panzano in the hope of securing a copy of the promotional poster used to promote Vino Al Vino Panzano, the annual winefair held on the third weekend in September to showcase the wares of local wineries. Although the poster was sold out, what I left with was a far more beneficial tool in my exploration of the wines of this area – a map of the region’s vineyards created by Alessandro Masnaghetti. 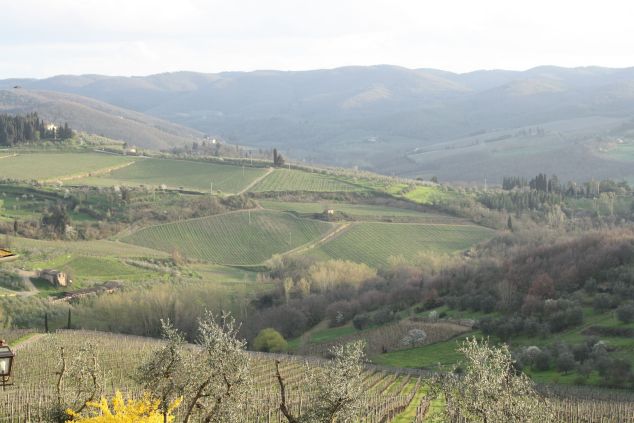 Surprisingly for a winegeek with a predilection for ‘la dolce vita’, and one who usually sucks in information on Tuscan vineyards quicker than a negroni at aperitivo hour, I’d never come across Alessandro’s wine-maps previously. Finding this map of Panzano vineyards was a revelation – while surveying the slopes of the Conca d’Ora, negroni in hand mind you, I could attribute certain vines to Fontodi, others to Il Palagio, Monte Bernardi, Castello dei Rampolla, Candialle and Querciabella.

This, in itself, is of little practical benefit since I’m unlikely to stow away into the vineyards to pilfer grapes to make my own Chianti Classico, or to leave a ‘message in a bottle’ amongst the vines for the proprietors of Il Palagio (Update: it would appear that this is not in fact the Il Palagio of Sting fame after all so my efforts of cheap humour are in vain – thanks for clarifying Moritz), but what is most useful, and indeed the factor that elevates these maps above others in the winegeekery stakes, is the further delineation of the territory into mini-subzones with explanations of of vineyard elevations, soil types and microclimates to support the topography.

The map divides Panzano into five subzones on the southern slopes (The La Massa Ridge, The Conca D’Oro, The Cafaggio Ridge, The Rignana Ridge and San Leolino/ Le Stinche) and two subzones on the northern side (simply titled Sector I and Sector II). The map stops short of proposing a hierarchical classification of vineyards, indeed it is explicitly excluded from the scope of this work, but the detail is sufficient to allow you to draw your own conclusions.

One can immediately appreciate the legwork and effort that has gone into producing these maps. Walter Speller has written a piece for Jancis Robinson’s Purple Pages (see here) about Alessandro’s work that is well worth reading. For those with an interest in wine that extends further than Panzano, you will be delighted to hear that Alessandro’s walkabout was not limited to the vineyards of this area or even those of Tuscany. A variety of maps are available to order from €7 via Enogea with some available in app version for the iPad via iTunes. These are a must have for anyone who wants to indulge in a bit of winegeekery.

← Exploring Biodynamic Wine – A Visit To Tenuta Di Valgiano
The Butcher, The Baker and The Flaccianello Maker – A trip to Dario Cecchini and Fontodi in Panzano →