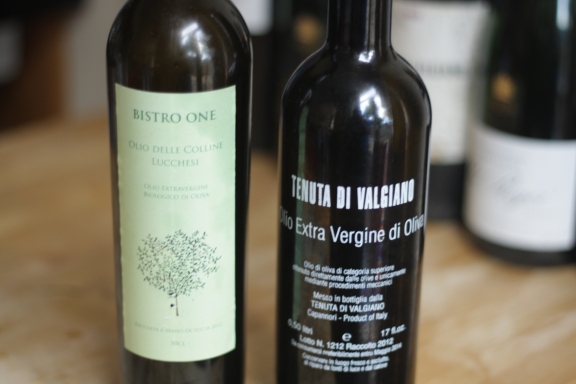 Don’t worry; I’m not going to prattle on about olive oil again until the new season’s oil is released later in the year but it would be remiss of me not to mention two particularly tasty bottles that have held pride of place on my table throughout the summer.

Interestingly, both are from the province of Lucca in north western Tuscany. The first is the house olive oil of Bistro One restaurant in Foxrock, Dublin. The Shannon family, who run the restaurant, but also have a house near Lucca, harvest the olives, take them to the local mill and bring the bottled oil back to Ireland for the diners of Bistro One to enjoy. The standout feature of this oil for me is its longevity – in my experience, it retains its freshness for a really long time after bottling. The Shannon’s actually have a hand in my enjoyment of the second oil too as it was they who first pointed me in the direction of Tenuta Di Valgiano. The Valgiano extra virgin oil hits, and maybe even surpasses, the heights achieved by their still wines – a feat not achieved by many wineries, some of whom view their forays into olive oil merely as a distraction from the main event.

I sense that the traditional heavyweights of the new season’s oil showdown may have a fight on their hands for the crown this year.

Disclosure: I received both of these bottles as gifts and know the Shannons.