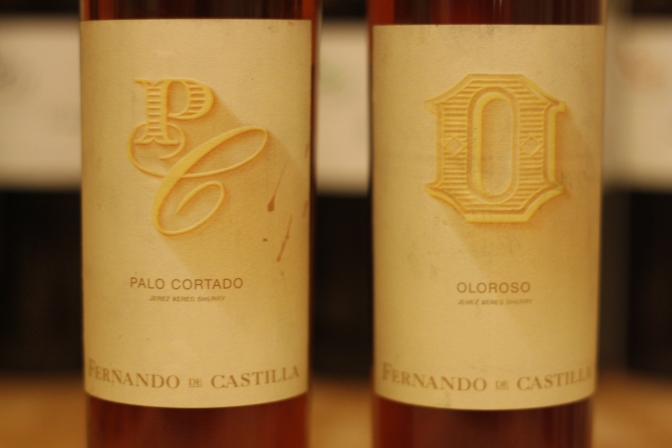 It’s day three of sherry week on The Vine Inspiration. Yesterday, I wrote about some of the most enjoyable aged fino and amontillado I tasted at The Great Sherry Tasting held in London last October.

Today, it’s the turn of palo cortado and oloroso. Once again, I’ve deliberately excluded the sherries of Equipo Navazos, as I’ve bought loads of them and need something to write about in 2014. 🙂 )

Bodegas Tradición made an appearance yesterday, and does so again today. I mentioned yesterday that Tradición’s focus for their dry sherries is VORS (Vinum Optimum Rare Signatum or Very Old Rare Sherry) with an average age of greater than 30 years. Tasting Tradición’s palo cortado (UK rrp £69-£89) alongside their amontillado can be a bit of a challenge in itself – sampling the intense amontillado before the more delicate palo cortado could lead you to consign the palo cortado to the also-rans. The reality is that there are quite simply no also-rans at Tradición and, indeed, this is arguably their finest sherry. Complex and nuanced,  I started to smell all sorts of things in the glass, including coffee – a new one for me with sherry; perhaps my mind was playing tricks on me. Overall, this was a beautifully balanced and elegant expression of palo cortado with outstanding length.

Tradición’s oloroso (£59-£75) was selected by Beltrán Domecq (president of the Board of the Consejo Regulador) to feature in his seminar on oxidative ageing. A truly delicious sherry – such a balance of elegance and intensity (the holy grail in my mind). It had real lift and freshness for an oloroso – characteristics that certainly endeared it to me. It goes without saying, and at this stage you should take it as a given with the Tradición sherries, that it had fantastic persistence and length.

Valdespino provided some more of sherries that were selected by Beltrán to showcase palo cortado and oloroso. The Palo Cortado Viejo CP (£33.99) showed amber-to-copper in the glass and had a nose that firmly, to my mind at least, placed it on the amontillado side of the palo cortado spectrum. It was still quite full bodied though, and very smooth on the palate, with flavours of hazelnut and walnut. My notes include the word ‘magnificent’. I think that’s a good thing!?!?!

The second sherry was the Oloroso Don Gonzalo VOS (average age above 20 years, £34.99). I must admit that I had my reservations about this when I tasted it during the seminar. For some reason, it was all just very muted. Everyone else raved about it though so, as soon as the seminar ended, I went down to the Valdespino table and re-tasted it; this had a far more encouraging outcome. A full copper-to-mahogany colour in the glass, a bit of aeration really revved up the aromas on the nose. This was full on and powerful, with a sweet nutty richness on the nose and a bone dry and quite structured palate; excellent!

The base level El Maestro Sierra range is very good – At this tasting, I found their 12 year old amontillado and 15 year old oloroso to be very elegant expressions of these styles. The bodega also produces an extremely limited quantity of sherries that, based upon my previous tasting of two of the three, are out of this stratospehere – the Amontillado 1830 VORS, the Oloroso 1/14 VORS and the Oloroso Extra Viejo 1/7 VORS. The Oloroso 1/14 VORS was on show at this tasting – I took no notes other than a scribble that proclaimed this to be an outstanding sherry. I put a lot of exclamation marks after it too – that’s gotta be worth something in a WSET exam right?

El Maestro Sierra VORS (I’m cheating as this is really the back label of the amontillado from my own collection but I don’t have a picture of the oloroso!)

I’m not going to write about Fernando de Castilla today since they supply sherry to Drakes Tabanco and will be the the focus of my article tomorrow. It would be remiss of me in any discussion of palo cortado and oloroso however not to mention the fantastic sherries in this bodega’s antique range. These are the sherries that changed my wine life – they, and bodega director Jan Pettersen, introduced me to the world of fine sherry and will always have a special place in my heart.

Stockists in Ireland and UK

Bodegas Tradición – Imported by Raeburn Fine Wines in UK. Not currently available in Ireland. Stocked Fortnum and Mason if you are willing to run the gauntlet of checked baggage.

El Maestro Sierra – Imported by Indigo Wine in the UK and available in The Sampler, Park and Bridge, Grape and Grind, Market Row and Roberson amongst others. Not currently available in Ireland. Black Pig had some earlier this year, but I and a few other lucky customers snapped them up.

Fernando De Castilla – Widely available in Ireland – wohoo! Searsons and Black Pig stock most of the range. Imported in the UK by Boutinot and stocked in The Sampler, Highbury Vintners and Woodwinters Wines & Whiskies amongst others.