This week is sherry week on The Vine Inspiration! Isn’t every week ‘sherry week’ I hear you ask? Well yes, but this week is particularly sherry filled, as I’m finally getting around to writing up my notes from The Great Sherry Tasting, which was held last month in London. There’ll be new post about sherry each day this week, but before I get into that, it struck me that, despite blogging about sherry for some time, I’ve neglected to write about some of the basics of sherry production.

This in itself isn’t anything out of the ordinary, as I’ve blogged about lots of topics without going back to basics (biodynamics immediately springs to mind), but what has stood out to me in recent months is the sheer number of questions my friends have asked me about sherry.

I’m not going to get all teacher-like, not only because I, as a relative sherry newbie, am not qualified to do so, but also because the last couple of years have seen the release of a number of books which do this job far better than I could ever do in a short blog post. These are “Manzanilla” by Christopher Fielden and Javier Hidalgo; “Sherry, Manzanilla and Montilla” by Peter Liem and Jésus Barquín; and the most recent release “Sherry Uncovered – Tasting & Enjoyment” by Beltrán Domecq. I’ve used some of these books, alongside the classic tome “Sherry” by Julian Jeffs, as references for this post.

So having taken up a couple of hundred words with my intro, let’s get down to a whistle stop tour of dry sherry (Note: I’m not considering Montilla-Moriles here either). This is a heavily abridged introduction – it’s not quite ‘sherry for dummies’, but you get the idea. In order to begin to understand sherry, you really need to get to grips with location and the role of flor; the solera system; and ageing.

The sherry region lies in southwestern Spain. As with the wine regions all over Europe, there is a protected region or appellation that defines the boundaries within which sherry can be produced – in this case the Demoninación de Origen (DO) of Jerez-Xérès-Sherry and Manzanilla Sanlúcar de Barrameda. I say produced, but, as with all things sherry, the reality is slightly more complex.

The ageing process is confined to these towns due to their favourable microclimates, which play a significant role in the growth of flor. There are a myriad of other factors, which exceed the scope of this article, but it is always interesting to note that many consider that Sanlúcar de Barrameda’s proximity to the sea confers a salinity to the sherries from this area. For what it’s worth, I find that many (most) finos also have this delicious saltiness that screams out for some food to accompany the sherry.

Dry styles of sherry are made from the palomino grape, grown on the chalky soils of the region. It can be tempting to consider sherry almost in isolation from the vineyards in which the grapes are grown, such is the influence of other factors on the style of sherry ultimately produced. To do so would be a mistake however, as this part of sherry is no different from other wines and the vineyards are incredibly important. I would encourage anyone with an interest in this topic to read Peter Liem and Jésus Barquín’s book, as it contains an excellent explanation of the various pagos (vineyard parcels) of the Marco de Jerez.

Flor as shown in a see-through barrel

Sherry is a fortified wine. Following fermentation, the wine develops a layer of flor (yeast) on the surface of the wine and is classified in preparation for fortification. More delicate styles of wine will be destined to become finos and manzanillas, with the fuller, richer wines ring-fenced for oloroso. The difference is important, as this is where sherry production tends to split into two very different pathways. But first, a brief word on the solera system.

Sherry is aged in a solera system – essentially a hierarchical structure of scales or rows of butts (barrels). Consider the image below. 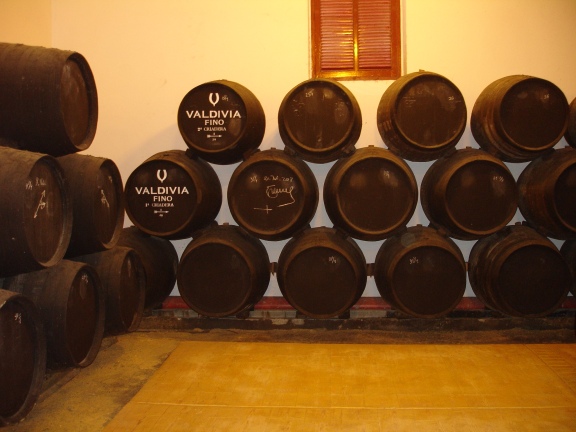 The barrels in this picture are 600L and have been filled to approximately 5/6ths capacity. When some sherry is removed from the bottom row (also confusingly called the solera – for explanation purposes, I’ll call it the solera row here) for bottling, the amount of sherry removed from this row is replenished with sherry from the row above (1st criadera). The sherry removed from the 1st criadera is then replaced with sherry from the 2nd criadera; sherry from the 3rd criadera (not pictured) is used to replenish the 2nd criadera and so on until you reach the final criadera. At this point, the cellarmaster draws on the classified, and just fortified, young wine (sobretabla) to fill the top criadera. Since a solera system may have many criaderas, in practice the butts are rarely stored on top of each other throughout the entire system.

So, the youngest wines are only introduced at the top of the system and take many years of blending to descend the scales and make it into the bottle you have on your table. Since each butt is a blend, sherry is not usually vintage dated. And for those maths nerds amongst you, the quantity of old sherry in the solera row asymptotically trends toward zero. In layman’s terms – the solera row, in theory, always contains some of the sherry from the year when the solera system was first filled.

Fino and Manzanilla are the most delicate styles of sherry. They are typically fortified to approximately 15% alcohol, a level which sustains the life of flor throughout its passage through the solera system (biological ageing). The flor protects the sherry from oxygen and confers a very distinctive character to the wines – one which is difficult to express without getting into wino speak of bacon fat and autolysis – basically, it smells yeasty. The easiest thing to do is to go down to the shop, get yourself a bottle of Tio Pepe and sniff away.

Oloroso is the fullest and richest of all dry sherry styles. The wine is fortified above 17% to kill off any trace of flor. As the barrels in the solera system are typically only filled to 5/6ths capacity, and the sherry has no veil of flor to protect it from the air occupying the remaining 1/6th, the sherry naturally interacts with oxygen (oxidative ageing). The resulting sherry is darker in colour, has an intense nutty aroma and sometimes a sweetness that belies its bone dry taste in the mouth (although that’s due to glycerol and for another day’s work).

Amontillado is a style of sherry that has been initially fortified to approx 15% and aged as a fino/manzanilla in the solera system, but then either undergoes a second fortification above 17% to kill of the flor, or the flor is allowed to naturally die. The sherry then ages oxidatively for the remainder of its life in the solera system. To my mind, this is the best of both worlds and results in generally complex sherries of finesse and elegance with distinctive hints of its life under flor, but also some of the characteristics of oxidative ageing.

Palo Cortado is quite a controversial style of sherry and has been the darling of the sherry revolution. So much so, in fact, that there seems to be much more if it on shop shelves than one would imagine possible for such a unique production process ;). Historically, palos cortado were wines of finesse and elegance (determined at the classification stage) that aged under some element of flor, but then “changed” and perhaps lost their flor, or were merely selected for removal from the fino solera due to their unique characteristics, and then were re-fortified to undergo a period of oxidative ageing. As you can imagine, the resulting complex sherry has an inherent delicacy but also a richness and body.

The production of palo cortado was a point of some discussion at a recent seminar hosted by Beltrán Domecq, who made a very clear distinction that modern palos cortado do not age under flor in the solera system. This is an important consideration which cracks the conundrum for me and led me to think of modern palo cortado production as two separate systems. My conclusion is that a palo cortado is a wine which is identified as a having a combination of body, delicacy and finesse and has been maintained under some element of flor for a period of time (months or years), perhaps as a sobretabla or vintage, but then for some reason (spontaneous, intentional, additional fortification, intervention of Gandalf or another wizard etc.) loses its flor. The wine is then re-fortified to above 17.5% and ages oxidatively once it enters the solera system. I’ll leave it up to you whether you prefer that description or the historical version – my suspicion is that the truth is somewhere in the middle.

The books referred to above are available from:

“Sherry, Manzanilla and Montilla” by Peter Liem and Jésus Barquín – www.sherryguide.net (US & Canada) and www.liquidcuriosity.ie (Europe and Australasia)

“Sherry” by Julian Jeffs – Now out of print I fear but I got mine on iBooks.

8 thoughts on “Dry Sherry – An Introduction”