A Visit to Drakes Tabanco

After such an intense day of palomino palate punishment at The Great Sherry Tasting (not a bad thing at all I might add, as I’m sure you gathered from my recent posts!), I took a day sherry sabbatical before paying a visit to Drakes Tabanco, named after Sir Francis Drake – the legendary privateer who was credited with defeating the Spanish Armada at Cadiz and returning to England with 2,800 butts of sherry. Nestled in the heart of Fitzrovia in central London, Drakes is the latest sherry and tapas venture from the folks behind Copita and Barrica. 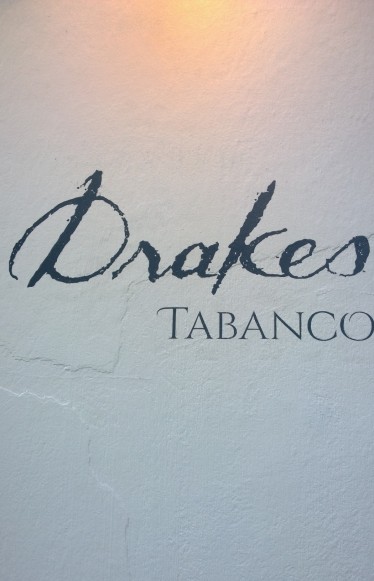 I had been looking forward to visiting Drakes ever since it opened its doors a few weeks earlier – so much so, that I thought nothing of arriving a good 30 minutes earlier than my friend, just so I could scope the place out, and ask all my geeky sherry questions without fear of mockery. As it happened, the looks I got from the two patrons sitting at the nearby high table while I chatted with founder Tim Luther cut no less deep than my friend’s reaction to me recounting Tim’s explanation on how the glasses were chilled (see below) :).

A Tabanco is a tavern in Jerez where sherry is sold directly from barrel, and so it was no surprise to be greeted by five butts (barrels) of Fernando de Castilla sherry immediately upon entering the bar area. Drinking sherry poured straight from the butt (maybe using barrel instead of butt would avoid the double entendre!?) represents the purest form of sherry consumption and avoids all of the processing steps that many sherries undergo prior to bottling, which rob them of some of their natural flavour and character. 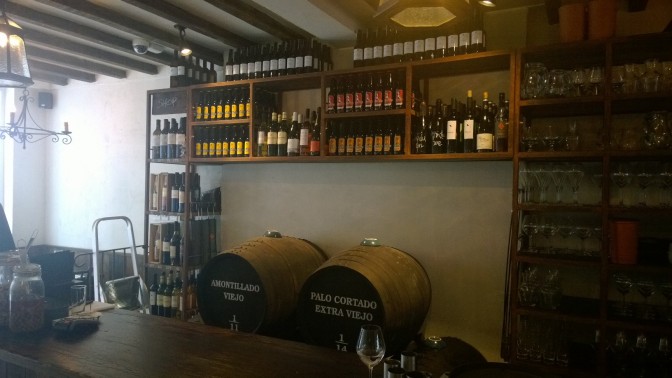 So, why order bottled sherry in a bar whose whole unique selling point is serving sherry direct from the butt? Well, quite simply, it’s because bottled fino en rama is supposedly the closest as you can get to drinking fino directly from the butt. Shipping butts from Jerez likely means a lot of upheaval and might work for intermediate and oxidative aged styles, but a delicate fino is unlikely to retain its film of flor when tossed around on the journey to London. En rama is the next best thing – a sherry bottled with limited processing and no (or very minimal) filtration. I wonder how Drake coped in 1587? 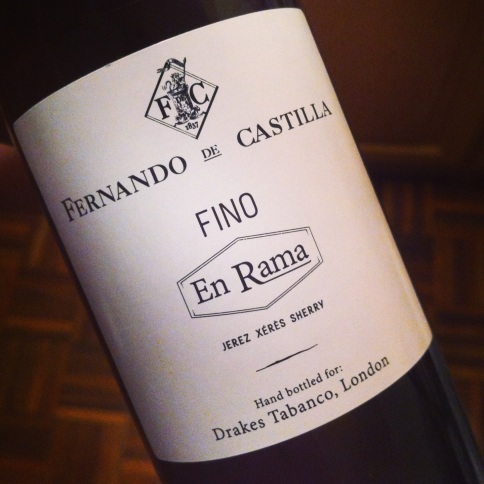 This is Fernando de Castilla’s first venture into the en rama market and, on this showing, they have entered close to the top. Fresh, intense, rich but somehow seems delicate (not an oxymoron in my sherry skewed mind!), saline and deliciously moreish – I was delighted to find out that Drakes also do takeaway 375ml bottles for £14.

After a glass of fino, my friend arrived and we descended to the restaurant area. In my eagerness to try as much of the sherry range as possible, we probably didn’t choose the ideal pairings for our food, but so be it. I started off with a glass of amontillado to accompany the charcuterie board and a plate of cured sardines.

Our eclectic culinary preferences were matched by the variety of meat offerings. The charcuterie plate seemed to ignore geographical borders and, far from this being a slight on quality, the inclusion of bresaola, goose rillettes and the like, elevated this above the humdrum fayre that one normally gets on such sharing boards.

Serving sherry direct from the butt is far trickier than one would imagine – and I’m not only talking about the difficulty of wielding the venencia. Opinions vary on the optimum serving temperature for amontillado, palo cortado and oloroso, but most would agree that cellar temperature or below is probably ideal. Not having a fridge to accommodate five butts, Tim played around with a number of different processes before settling on placing the glasses in a fridge freezer and removing them prior to pouring the sherry. After some taste testing, the team found that this method allowed the to arrive at the table at the optimum temperature. 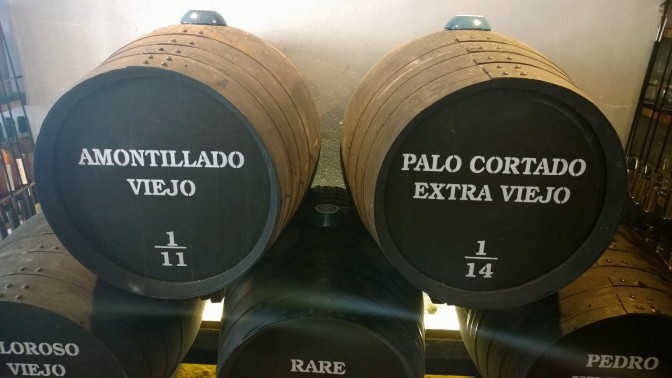 The amontillado at Drakes isn’t drawn from the Antique solera row at the Fernando de Castilla bodega, but instead it is taken from the 1st criadera. While this reduces the average age by a few years, you are still talking about a sherry averaging 20 years of age. Perhaps I’m guilty of believing the hype, but I certainly felt there was an added freshness and lightness of touch to this and the oloroso, which I tried as a nightcap alongside some cheeses. The Antique range of Fernando de Castilla sherries undergoes minimal filtration as it is, so maybe this revelation is attributable to the fact that both sherries are sourced from the 1st criadera? Whatever the reason, they were both delicious.

My friend isn’t really a sherry drinker and, despite my best efforts to convert her to the dry styles, she found most enjoyment in the rare old india sherry – a slightly sweetened oloroso, ‘barrelled’ especially for Drakes. I must admit that, despite my general disdain for these styles, this was an elegant and relatively complex example – a very enjoyable sherry in its own right but certainly a great starting point for those more familiar with sweet styles. 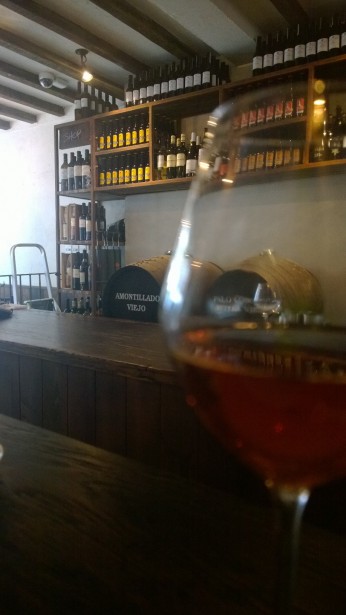 So that’s it – I didn’t leave anything out did I?

Ha! You didn’t think I’d leave without tasting the palo cortado? Well, actually, I did…but…I returned a couple of days later. The barrel of Fernando de Castilla palo cortado at Drakes is the full monty – sourced from the Antique solera (the solera row in this instance and not the 1st criadera as for the other sherries). It sang alongside a plate of jamón – intense but with a elegance and precision that marks this out as one of the best examples of this style that I’ve ever come across.

4 thoughts on “A Visit to Drakes Tabanco”